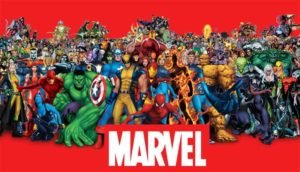 Marvel Comics is the #1 comics publisher from America. It was founded in 1939 as Timely Comics by Martin Goodman. Their first book was Marvel Comics #1, published in October 1939. This comic featured the first appearences of the Human Torch and Namor the Submariner, among others. Don’t even think about buying it, last sales prices where around $350.000…

Also in 1939, Goodman hired his wife’s cousin, Stanley Lieber, as an office assistant. Stanley will later become Stan Lee, editor and one of the main writers of their comics’  lineup.

The name Marvel Comics would only be adopted in 1961, with the relaunch of the superhero comics line. The first modern comic book with the Marvel Comics brand was Journey into Mystery #69. But the real first hit was the launch of Fantastic Four #1. This book marked the coming of Marvel into the superheroes line again.

From then on, Marvel introduced us to many of the most iconic characters of comics history: Spider-Man, Captain America, The Hulk, Daredevil, Thor, Iron Man, the Ant Man, Doctor Strange, Black Panther, Captain Marvel, Wolverine, Doctor Doom, Magneto, Galactus and the Silver Surfer. Also, supergroups such as the Fantastic Four, the Avengers, the X-Men and the Inhumans. Most of us took many of Marvel’s characters to school in our backpacks or lunchboxes during our childhoods.

Later on, Marvel expanded to other media, first by developing cartoons that were pretty famous from the 60’s, and specially during the 2000’s, the launch of Marvel Cinematic Universe, which produced some of the biggest blockbusters of the last years. Also, TV series as Daredevil, Jessica Jones, The Punisher or the Defenders, to name a few.

Where to find the best Marvel’s history available

If you are really a comics lover and want to get to know more about Marvel history, please, please read Marvel Comics: the Untold Story by Sean Howe. It recaps the whole story from Marvel since their begginings, and you’ll find out and understand much of what happened “behind the scenes”. Really, it one of the most gripping books I read in the last years, and it will leave you gasping for more! 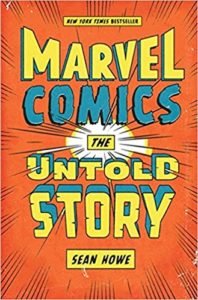 In the menu under Marvel Comics you’ll find our detailed reviews about Marvel characters. Our first review is already there: Best Daredevil comics, so enjoy it! We’ll add new material form time to time.

I will add one note: as Amazon Affiliates, we get a small commission (at no extra expense to you, of course) from the purchases you make by going through our links. So if you click on the links and make a purchase, you’ll help us continue making this reviews tou you. Be aware that, as we mention in the about us section, we only recommend the things we read, and enjoyed. We don’t recommend things we didn’t like. We don’t usually trash it either, there are tastes for everything and we don’t want to be unfair with the creators. And as a general policy, we also don’t review things we haven’t read. If in any case we fall victims of some hype, we’ll make it explicit to you.

Keep up the Good Reading!

I must start by saying that I do love Frank Miller’s work. Seriously. If you don’t believe me, check this article I wrote some months ago. He produced some of the best and most influential comics I ever read. But when I read Superman: Year One, only one thought crossed my mind: why did they […]

I recently suscribed to Kindle Unlimited, and boy, I was in for a surprise! I noticed there are many great comics to read for free, and many of them are best of the best classics. Ok, we might discuss that since you have to subscribe to Kindle Unlimited, it’s not completely for free. But if […]