If you read comics for some time you know Batman and you know the Hulk for sure. But… did they ever fight each other? And did Batman, a simple human in thighs, ever beat the Hulk? If so, when and where?? And how???

The answer may be surprising to you: yes, Batman DID beat the Hulk in the DC Special Series Vol1 #27, from 1981. In that crossover between DC and Marvel, Batman fights Hulk not once but twice, and in the first fight defeats the Hulk. To defeat the Hulk, Batman throws sleeping gas pellets from his utility belt, and them obliges Hulk to breathe by throwing him a powerful kick to his solar plexus. The sleeping gas, that “can flatten a herd of elephants”, does the rest.

DC & Marvel have done crossover many times, and the Batman vs Hulk one is the second one of a quite long list. If you want to find out more about this story, and other classic DC & Marvel crossovers, keep reading and you won’t be disappointed:

The Batman vs The Hulk 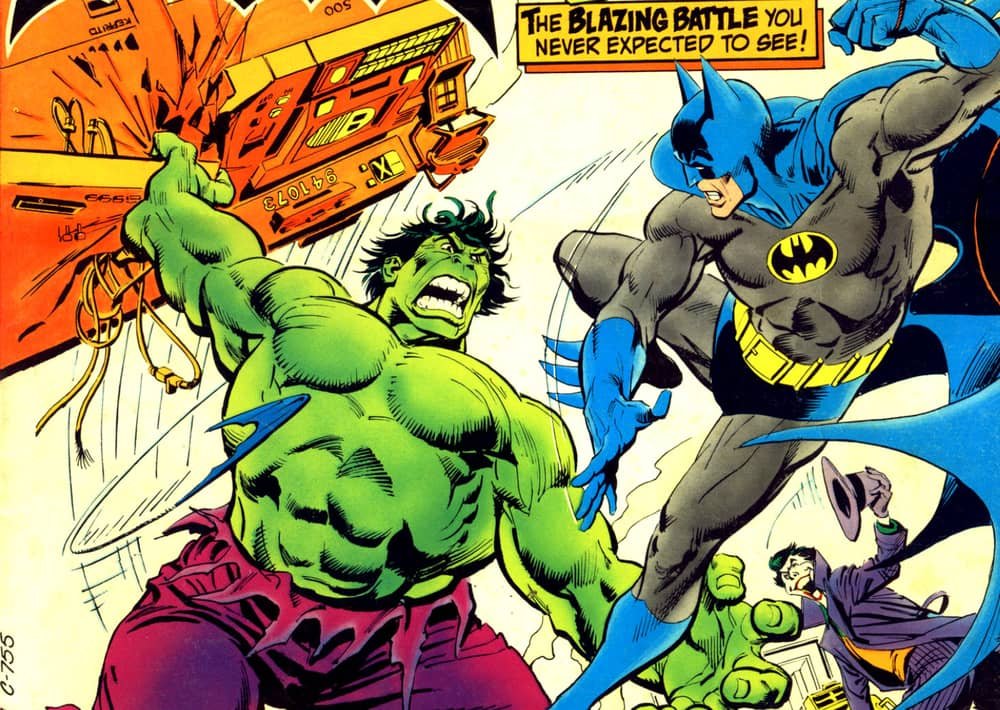 The Hulk and Batman faced each other in DC Special Series #27, from September, 1981. Len Wein, also known by putting the New X-Men together in the Giant Size X-Men #1 and creator of The Swamp Thing,  was the writer of the story, while Spanish José Luis Garcia Lopez did the pencils, lenendary Dick Giordano did the inks, and Glynis Oliver did the colors.

The comic was published in the Treasury format, which was an oversized one, and was 64 pages long and costed around five times the cost of a common comic at the time. That happened in a time when graphic novels were not a common thing as they came to be, so by the time it was a rarity.

It was an interesting choice to make to make the two characters face each other. On one side The Hulk, that represents the brute force, an almost unstoppable force of nature driven by rage. On the other, the Batman, a simple human, without any special powers but his intelligence and his ability to fight in a cold and cunning way. The clash was an interesting one to watch…

The chosen villains to face them were The Joker (who else!) and the Shaper of Worlds, a not so well known character, which is kind of a corporeal cosmic cube that can give omnipotence to whoever controls his powers.

At the beginning of the story, we see some unknown characters suffering some reality bending events, the reason of them we cannot understand at the time.

Later, we find the Joker closing a deal with an unknown ally, which we cannot see but we know that it’s in pain. The Joker is supposed to bring him something to alleviate it. The item in question is none other thing than an experimental gamma ray gun that is being developed in one of the Wayne Corporation research facilities.

Casually, Bruce Banner has started to work at those facilities under a secret identity, so when the Joker attacks he turns into the Hulk. The Batman responds to the alarm Banner fired right before his transformation, so there we have our two main characters facing each other for the first time. 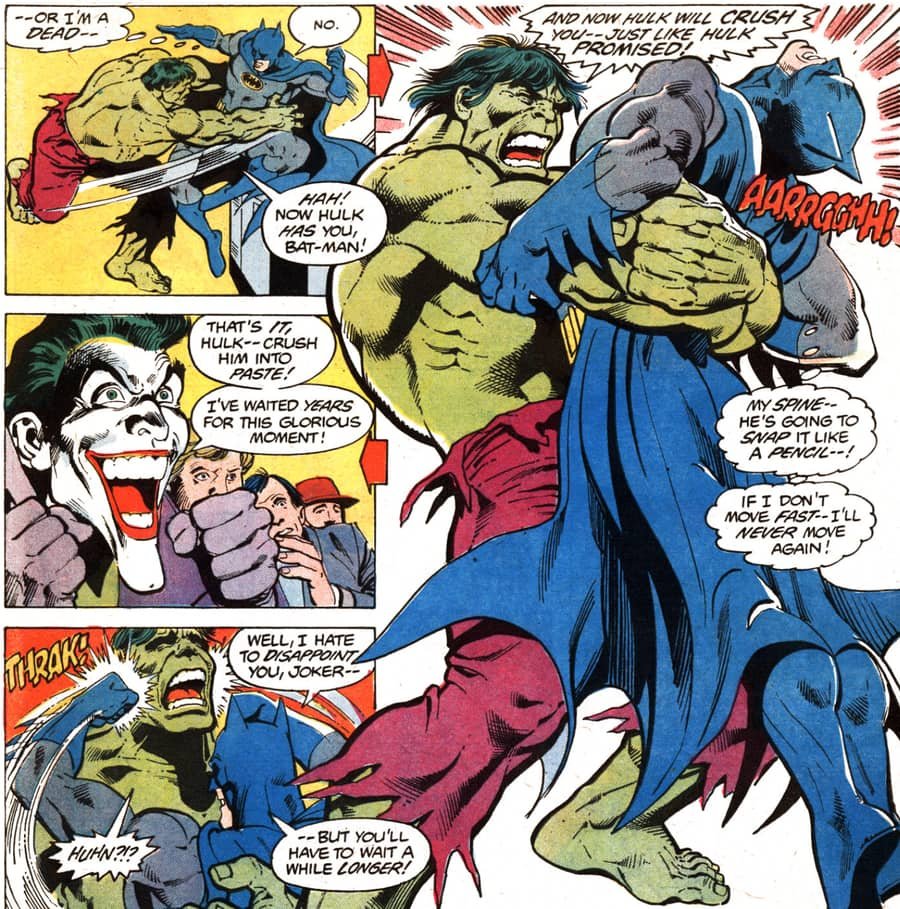 The Joker convinces the Hulk that Batman is a foe, and the Hulk reacts as… well, the Hulk! He attacks Batman, and after a fight that nearly costs Mr. Wayne his life, he manages to escape the Hulk’s embrace and as mentioned before, releases a knock off gass that can drop a herd of elephants. The Hulk tries to catch his breath, but Batman applies a powerful kick in the Hulk’s solar plexus that mekes him release his air and breathe again, and so the Hulk is defeated. Easy, aint’t it? 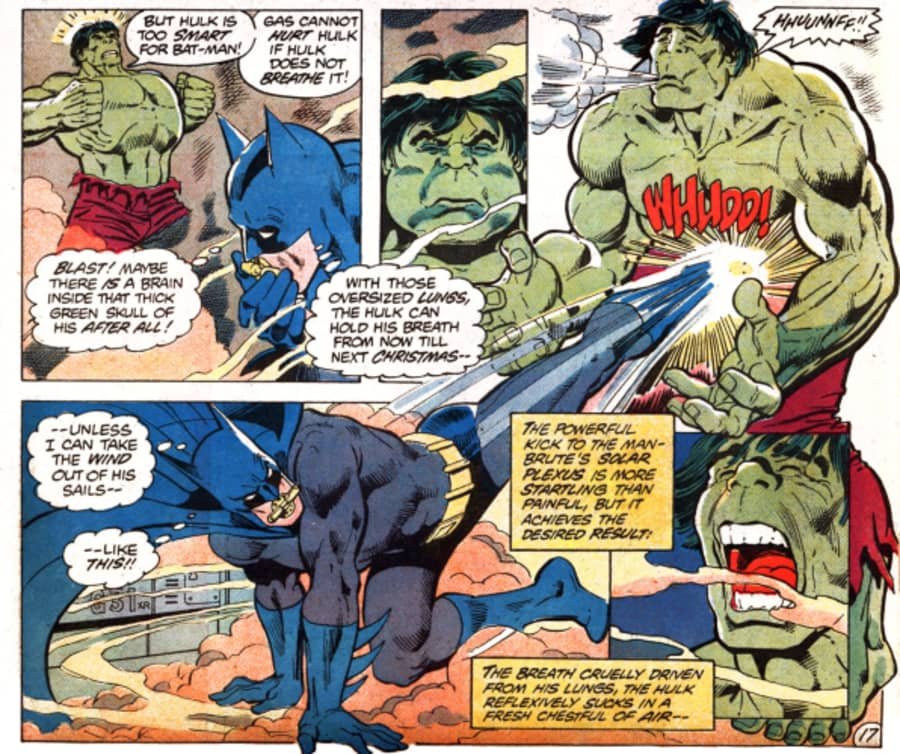 After the Hulk turns to Banner, Bruce Wayne offers to hire him to build the replacement of the stolen gamma ray gun. Meanwhile, we see the Joker using the Gamma Ray to try to “cure” the Shaper of Worlds (who is revealed as the source of the strange events at the beginning) and the Joker reveals that is goal is to use the Shaper of Worlds to make the universe as crazy as he is.

While Banner is working for Wayne Industries developing the new gamma gun at a ship at sea, the story offers us a hidden gem: in a very funny moment, Alfred offers Banner some tea: “perhaps a spot of tea will calm your nerves, Dr. Banner”… why didn’t anybody think of that before!

The Hulk is then captured by some military types, that we later find out that are operatives sent by the Joker and the Shaper of Worlds, with the idea to capture Banner to make adjustments in the gamma gun the Joker previously stole, to cure the Shaper. The Hulk manages to escape, but the Shaper decides that the cure to his ailments may not be the gun, but the power inside the Hulk himself.

The Joker convinces Batman that they have to find the Hulk to stop what’s happening, and after following him flying tied to Hulk’s ankle by his bat-rope, Batman faces the Hulk again. This time, Batman tries to do the same gas trick on Hulk, but with a single wave of his arm the Hulk disperses the gas.

The Hulk then throws a car at Batman, who manages to escape certain death by jumping through both it’s windows. Batman tries to avoid the Hulk’s wrath by throwing some smoke bombs to hide himself, but Hulh smashes the down the whole building! 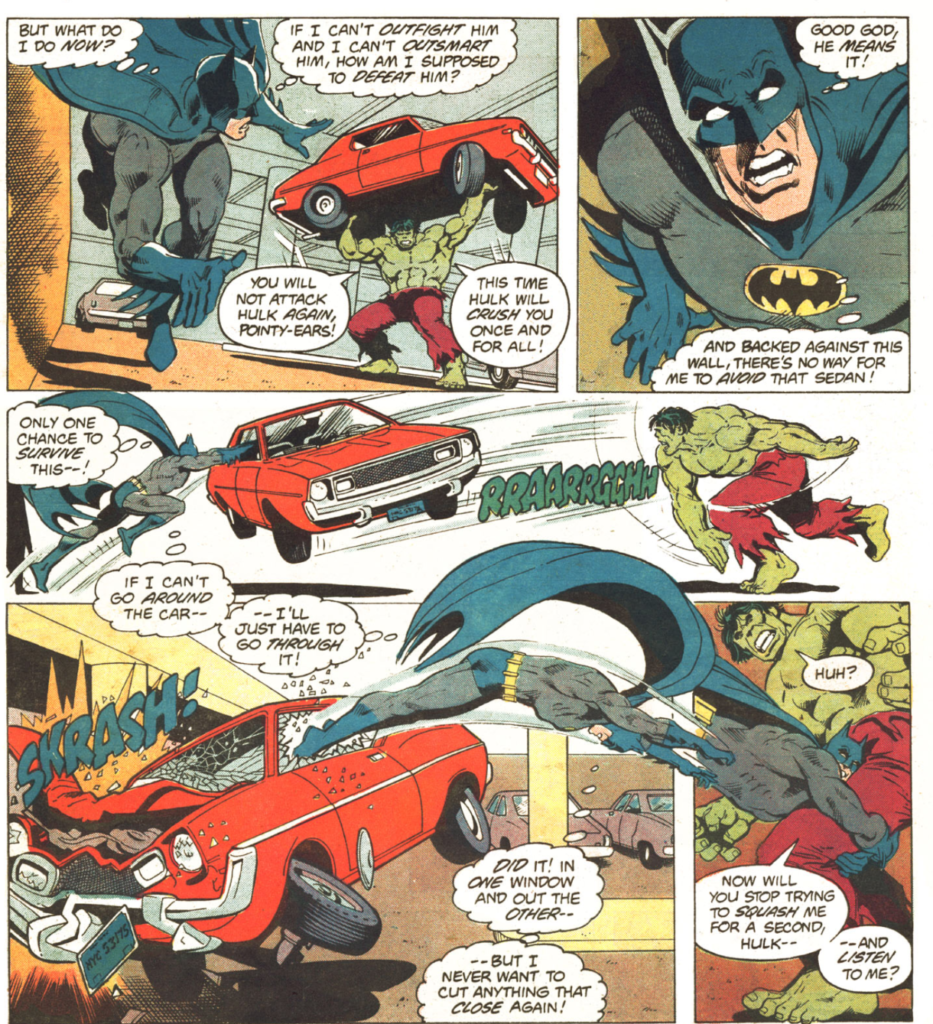 The Hulk jumps away into the night, and Batman gets out from the rubble with a new idea. He disguises as an old blind man, calms the Hulk down, and leaves him with the Joker to take him to the Shaper of Worlds.

However, before they arrive, Batman comes in to go along with the Hulk to face the Shaper. After the Hulk confronts the Shaper of Worlds, he siphons off Hulk’s gamma energy and all seems to be ending well: the Shaper is cured, and Banner is rid of the gamma energy that curses his veins. But…

A deal is a deal, and the Shaper will pay his promise to the Joker. He promised him he would make that whatever the Joker dreamed, he would make real.

Here comes maybe the most visually interesting part of the story, where the Joker starts bending reality and Garcia Lopez takes influences from Dali, Picasso and Alice in Wonderland to depict the altered reality. Need I to say that Bunner becomes the Hulk again to help Batman stop the Joker, the Joker ends in Arkham and Banner wanders again to try to get rid of the Hulk? Ah, didn’t think so…

The best Hulk comics stories that you MUST read! 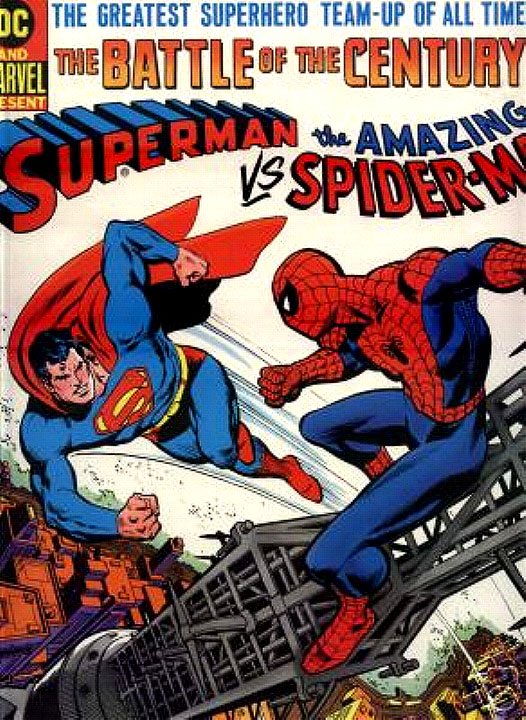 Even traditional rivals, DC and Marvel have a history of crossing over their characters to do common stories. This started way back in 1976, when the first Marvel & DC Crossover came to see the light: Superman & Spider-Man came together in an oversized, tabloid format 96 pages comic book.

This first crossover was produced by a creative team made by DC and Marvel authors in almost exact proportions: written by Gerry Conway, who had previously written both Superman and Spider-Man comics, drawn by Ross Andru, who also had previous experience with both characters, inks went to Dick Giordano and colors to Glynis Oliver.

There were no explanations about how Spider-Man and Superman could be together in the same universe, just a small trip away one from the other. So both companies decided to repeat the formula for their second crossover and put together two of their main characters in the same book again with Batman and Hulk. Of course, money making helped the decision… 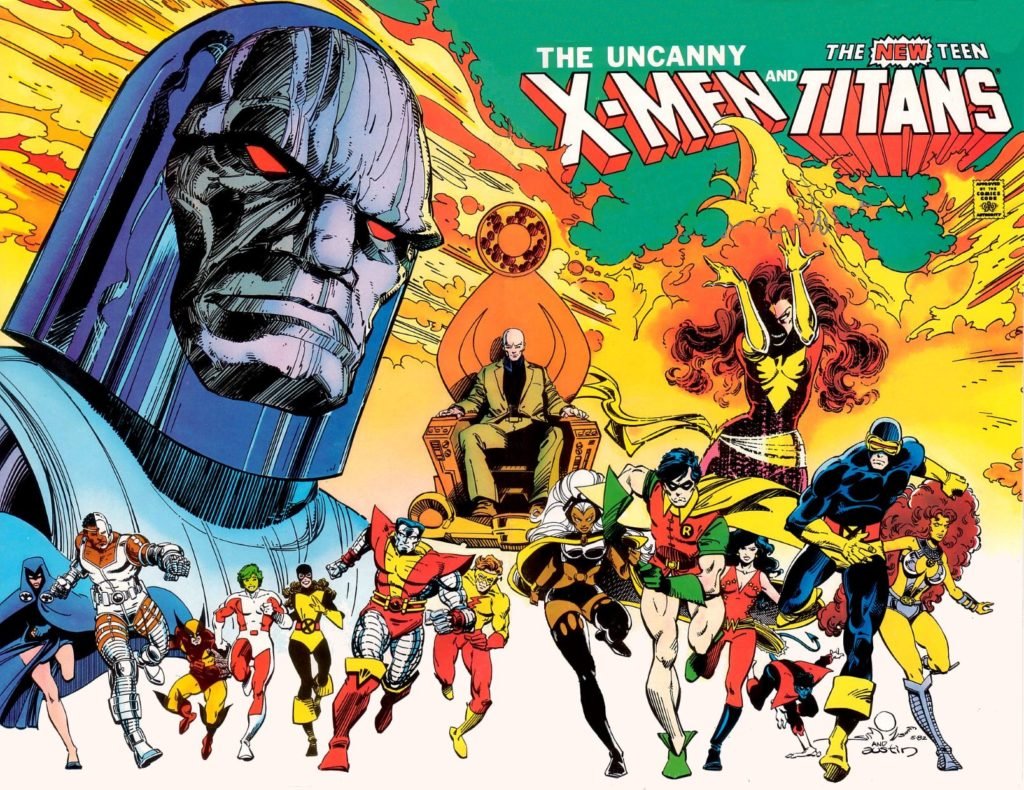 In 1982, they repeated the formula. This time the characters were the Uncanny X-Men and The New Teen Titans. In this story, written by none other than Chris Claremont and drawn by Walt Simonson, Darkseid resurrected the Dark Phoenix. Hot as is comes!

All was generating the climax to get more of this time of crossovers, but due to editorial differences projects as the George Perez’s Justice League / Avengers crossover was shelved.

The 90’s: the reappearance of the crossovers 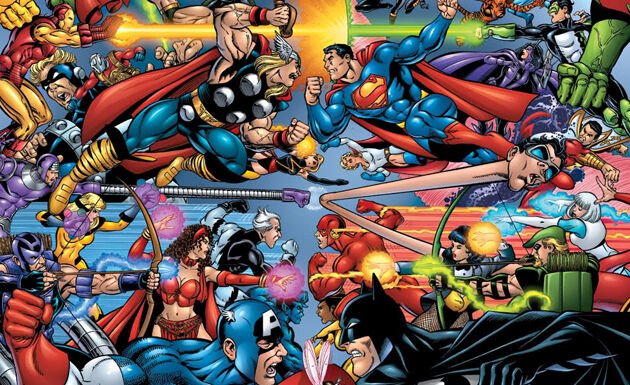 In 1994 the first spark of the crossover appeared, with a couple Batman / Punisher crossovers (one produced by each company), and the next a Spider-Man / Batman crossover.

In 1996, DC vs Marvel, a four part miniseries, saw the light. There are mixed opinions about it, but it sold like Coke in the desert at the time. As a result of this miniseries, both companies created the Amalgam universe, where characters had some elements from heroes from each universe. As an example,  the was the “Dark Claw”, who mixed Wolverine with Batman. The premise sounds interesting, but it’s very difficult to develop in just one book for each character… 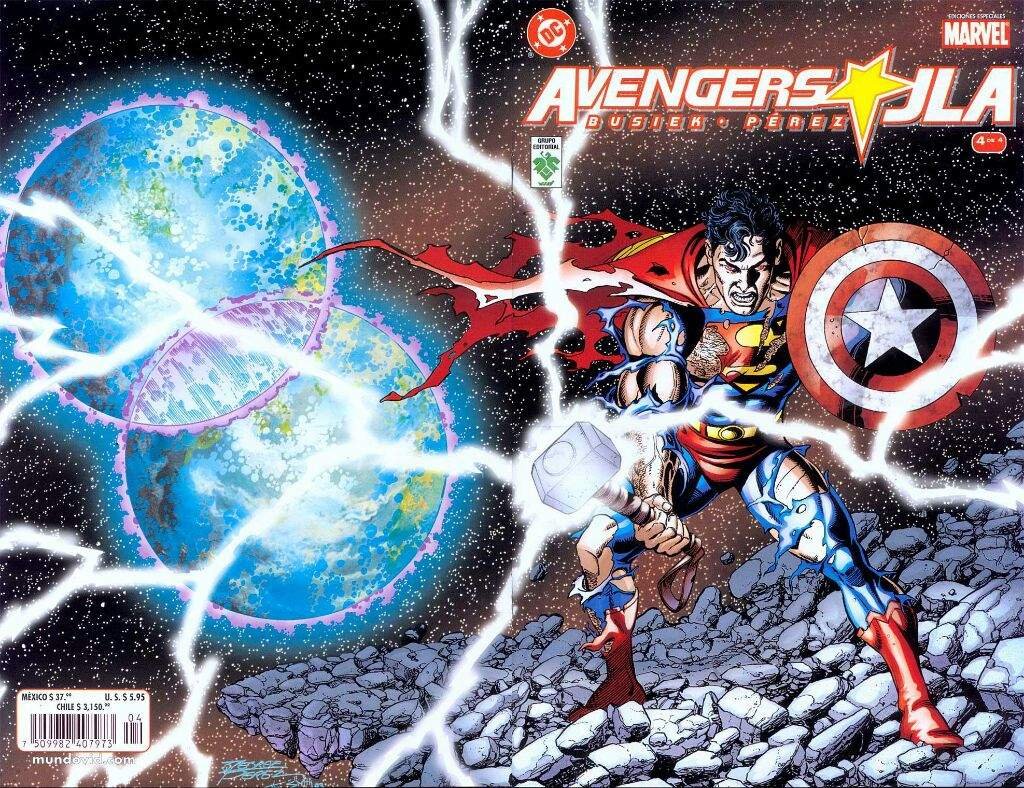 But probably the best of them is JLA / Avengers, a 4 part miniseries written by Kurt Busiek and drawn by none other than… George Perez. The story went full circle.

With rumors on new crossovers running galore, it could be a nice time to review these stories!

Check them out… they may not be the best of stories, but they’re fun for sure!

And as we always say… keep reading good comics!

P.D.: and if you want to know which are the best Batman comic stories for us, please be sure to check this article!

And if you want to know which are the best Hulk storylines for us, go and check this other one!

Who is the Moon Knight and which are his best comics?

How many Green Lanterns from Earth are around there?

Analizing comics to come out of press in the months to come, these are some of our picks from DC Comics solicitations. Some of them are new material, some of it are hardcover reprints. Yes, hardcover is the format I like the most, as I explained in the Single Issues or Trade Paperbacks article, because […]

When you want to start reading comics from Batman, there’s so much material that you might not know which are the best, nor where to start with. Maybe due to the fact that it’s one of the most human superheroes around, maybe because of it’s great gallery of villains, or even to the more than […]