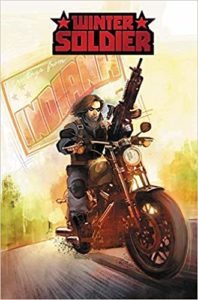 I started reading this series and I really didn’t give much about the first two issues. Bucky (sorry, Winter Soldier…) turned into some kind of repo man that get’s informants from Hydra out of sight, and gives them new identities in new cities. One of the informants talks too much on the phone, gets spotted, and a Bucky-like assassin attacks them. Fight scene, blah, blah… I pretty much recapped the first issue.

The story really turns then into a second chances story, because old Bucky (sorry, Winter Soldier…) wants to give young Bucky (which is called RJ, by the way) a second chance. Of course, he’s a cold bloodied murdered, but since he´s also been brainwashed by Hydra he’s not responsible for killing all the people he did. And believe, he’s really been killing on cold blood… Also, seen similar things before. Comes to mind Bucky´s (sorry, Winter Soldier´s!) own story.

But just when I thought the story didn’t add much to previous readings, and was really thinking about dropping it… RJ father’s appears. And that’s when the twist that makes this book become a good one.

Without giving much of the remaining story here, it reminds me much of a father / son relationship. What does a father do when he thinks his son is taking bad decisions? Is it better for him to intervene, even when his son would get mad at him if he knew? Very real, very human questions.

Also, Bucky’s reactions towards the end of the story are glorious. I bet you never saw a comic book hero doing much of the things Bucky (sorry, Winter Soldier again!) does here, which reminds more of a Cohen brothers’ film than traditional super heroes comics. This is probably what I love more about comic books, finding out how a superhero deals with a difficult situation as a man.

Recommended? Yes, you’ll have a good time reading it, and it’s one of those comics that you will remember of. Thumb up for this story!

Until next Good Comics Fast Review, and good reading!!

The Best Daredevil Comics & sagas that you MUST read!

The Avengers are enjoying an all-time high with the success of the Marvel Cinematic Universe and, specifically, Avengers: Endgame, which has become the highest grossing film of all time. These days everybody is familiar with the likes of Iron Man, Thor or Captain America, and even more cult favorite characters like Black Widow or Hawkeye. […]

The Marvel Cinematic Universe has definitely changed the way we see superhero movies and the way we consume them due to the fact that we kind of expect these films to now be a part of a shared universe. This has allowed Marvel Studios the possibility of presenting characters to the world that perhaps would […]