I will start this review saying that, much to my own surprise, the Thor by Jason Aaron run is one the sagas I enjoyed the most during the last years of comics. But also, finding Jason Aaron’s run on Thor is quite confusing for someone who wasn´t following the title (as I was) due to Marvel’s dumb and continuous renumbering.

So let’s try to light the road a little bit for the newcomers here and clear a little bit the reading order. Follow the breadcrumbs and you won’t be disappointed. You’ll find some of the most epic stories that have been produced in recent years.

Why I never cared about Thor?

I have to be completely honest with you. In the many years of reading comics I have, I never cared much about Thor. Yes, I know there have been good runs in the Simonson time, and I read some good issues during the Straczynski and Coipel run, but all that Asgardian stories was not my thing.

Who cares what happens in Asgard, their battles with the frost giants, Loki trying to trick everybody, Hela, and all that stuff? What’s to like about a Thor talking in crappy old English? That was so difficult to read to me. Well, it seems that this guy Jason Aaron cared about Thor, and he constructed a story universe so powerful and intense that made a non believer as me totally care about the characters.

As a matter of fact, Jason Aaron constructed in Thor an epic story that somehow resembles the Lord of the Rings, in terms of introducing lots of characters that you don’t know beforehand. He makes you care about and love them in a very short term, and presents villains you come to hate strongly and really want to see defeated. I believe that’s the strongest point from Jason Aaron’s story on Thor, he makes you FEEL about the characters. Even the one I thought (before reading the story) that was a cheap gimmick: the female Thor.

But before you start, remember that as Amazon Affiliates, we get small comissions every time you purchase one of this books by going through our links. So if you do it, you will not only read excellent stories but also support us to continue generating this kind of reviews.

I. Thor: God of Thunder

This series runs for 25 issues from 2012 to 2014. There are many great storylines starting in these books, so good that are part of the drives of the current War of the Realms storyline. You can go for the single issues, but as always, my recommendations to save time, space & money is to go for the collected volumes: 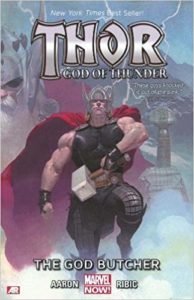 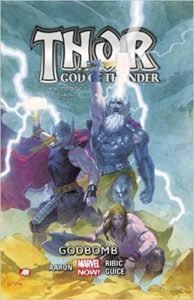 Introduces a powerful enemy that, as his name indicates, kills gods. Also, starts playing with stories from Thor at different stages of his life, where you see how his own character modifies, from a hot headed young boy to a lonely, depressed yet proud old warrior.

In this series Aaron reintroduces Malekith, a dark elf that appeared for the first time in Thor #344, back in the Simonson’s days. And what a villain he makes! It’s one of the most evil ones you’ve seen in comics. Mark my words for when you read this books.

Also here the interactions between the different realms is expanded, and we’re even introduced to the League of the Realms, a concept that resembles the Community of the Ring from Lord of the Rings. Greeeeeeat story!

In this book, Thor faces non other than Galactus. In addition, we’re introduced to Dario Agger, head of the rotten Roxxon corporation, and with a quite interesting secret within himself. Another great villain that gets in the fold.

And we also dive dipper into Malekith’s story and get more hints of the things to come.

As always, the story is also collected into a couple of hardcovers, which I prefer due to the quality of the publication: God of Thunder, Volume 1 and Volume 2.

This series is interlaced with the previous collection, but places important bits of history in the things to come.

The story takes place after the beginning of Original Sin and before Thor: God of Thunder #24. A new realm appears here, and an important character in the new Thor mythology.

This story features the murder of Uatu, the Watcher, and many secrets are revealed, including one that will change Thor’s life forever and will be pivotal in the series to come.

This collection runs for 8 issues (eight issues!! Can you see why I’m so pissed off about these renumberings!?) and introduces the female Thor. When I read this, I believed it to be a stupid gimmick from Marvel, to draw attention to the character. As the many deaths of _______ (place character here).

But no. This series answers the enigma of who holds the Thor identity now, while disarms the Thor you came to know in the previous incarnation. Literally. Jason Aaron built a consolidated story that made us really CARE about the character, and made her be really worthy to carry the name.

This is series is collected in two volumes:

Update July 2019: if you heard the announcements from Marvel Studios at the San Diego Comicon,  next Thor’s movie, starring Chris Hemsworth and Tessa Thompson, will include Natalie Portman who will become Thor, goddess of thunder. If you want to know where these stories are inspired… start here and with the next title:

Thanks to Marvel’s “magic numbering” system, this collection goes from issues 1 to 23, then jumps to 700 and continues to 706. Crazy, isn’t it? When will somebody tell this people that this is horrible for people who wants to read their books? Not to say that it also means they consider them stupid. Or maybe we are, because if they do it is because we usually buy higher quantities of round numbers like #700, etc. Anyway, is a disrespect to the readers and the characters…

Ok, I’ll quit the Grampa Simpson’s complaints, and go with the stories… that’s what really matters.

The coalition of adversaries continues to build, as the new Thor battles Odin himself. As a corollary, we get to know the untold origin story of Thor’s hammer. 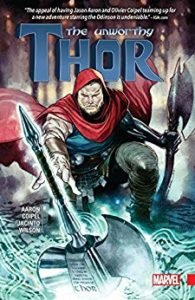 Again, there are a some hardcovers that collect the whole story: Thor by Jason Aaron & Russell Dauterman Volume 2 (Mighty Thor), collecting issues 1 to 12, and Volume 3 collecting issues 13 to 23, 700 to 706, Generations: the Unworthy Thor & the Mighty Thor 1, and Mighty Thor: at the gates of Valhalla. Real, real good books!!

The Odinson is back as Thor in this new series.

If you read all this material, you have read the whole road to the War of the Realms, the series that is currently coming out of print.

Maybe you haven’t read anything of this saga, as myself some time ago. Go and check it and start RIGHT NOW!!! You won’t be disappointed at all, it’s money well spent.

That’s all for now folks.

Keep up the Good Reading!

Our Picks from DC Comics Solicitations – May 2019

Iron Man is a very interesting case in the world of comic books. Even though he is one of the first ever Marvel characters, going all the way back to the 60s, he never really became an extremely popular or iconic comic book character, much like Spider-Man, X-Men, Hulk or Captain America were during large […]

I must start by saying that I do love Frank Miller’s work. Seriously. If you don’t believe me, check this article I wrote some months ago. He produced some of the best and most influential comics I ever read. But when I read Superman: Year One, only one thought crossed my mind: why did they […]